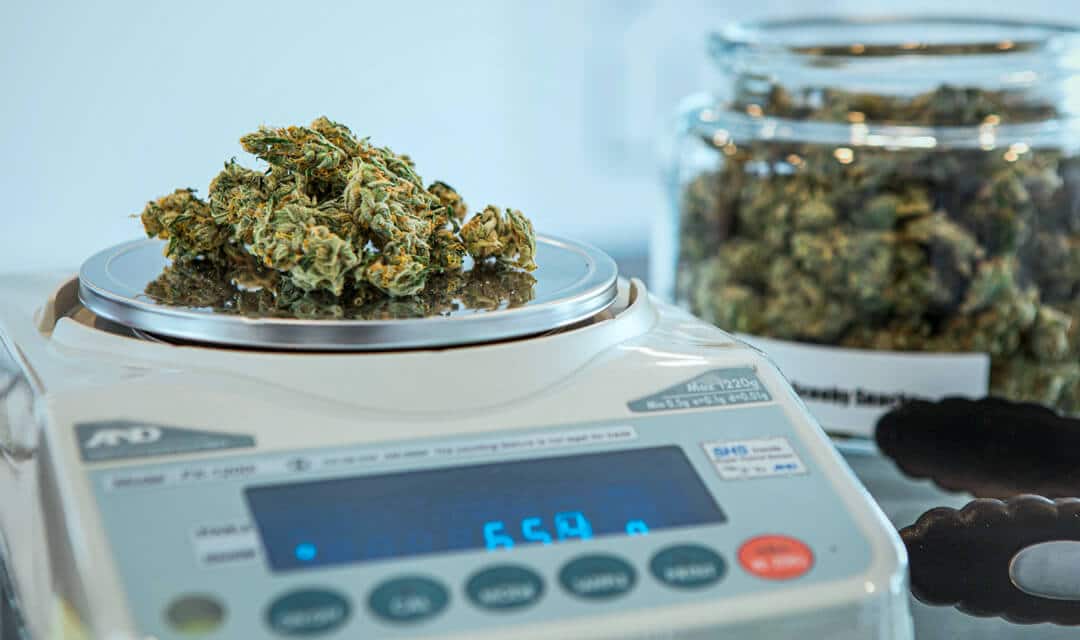 Cannabis sales in Colorado set a new monthly record in May, hitting their highest level since recreational sales began in 2014.

Dispensaries sold $192,175,937 worth of products in May, according to data from the Department of Revenue’s Marijuana Enforcement Division. That’s up about 29% from April and an increase of 32% from May 2019.

Roy Bingham, co-founder and executive chairman of BSDA analytics firm, said a confluence of several factors caused by the pandemic are likely causing the increase in sales. For one, many people may have more leisure time and are spending more time at home, where cannabis is typically consumed. Existing marijuana consumers also are buying more each time they go to the dispensary, a trend that started with stocking up in March when Colorado went under a statewide stay-at-home order.

“Everyone has perhaps become more used to consuming a little more,” Bingham said.

After losing market share to products like edibles, flower is seeing a rebound in sales likely driven by drops in price, he said. According to BDSA, cannabis buds were going for $4.37 per gram in May, down from about $4.71 per gram in January.

“It’s beginning to look like cannabis is anti-recession, or at least COVID-recession resistant,” Bingham said, adding Colorado has experienced “spectacular growth” this year.

Liz Connors, director of analytics for Headset, which also tracks consumer trends, expects sales will continue to build on that in June and July as tourism increases.

Dispensaries in the Centennial State were deemed essential businesses during the early days of the pandemic and the statewide stay-at-home order. So far, monthly cannabis sales this year have consistently outpaced 2019, which was the highest-grossing year on record. 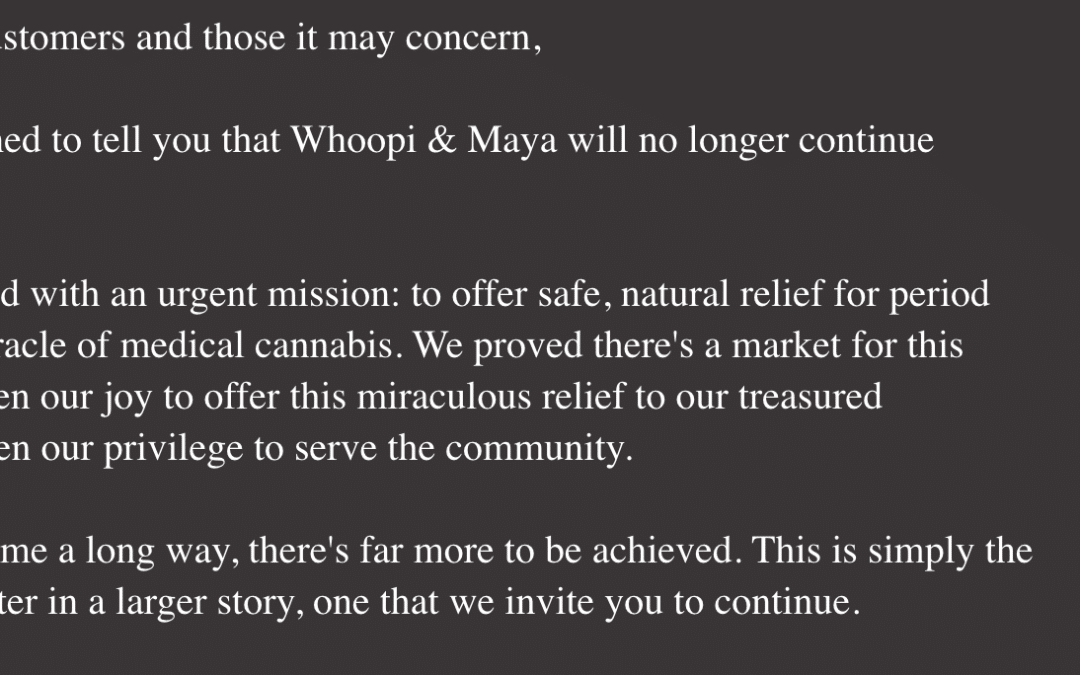 Whoopi & Maya, the medical cannabis company co-founded by Whoopi Goldberg, is closing up shop, according to a statement posted on its website.

In an interview with CNN Business, Rick Cusick, a Whoopi & Maya board member who helped found the company with Goldberg and Om Edibles founder Maya Elisabeth, said he received word Friday from Goldberg that she planned to step away from the brand.

“It became clear to everybody that Whoopi and Maya wanted a divorce,” Cusick said, noting he was speaking for himself and not the company or its board. “How do you do that? Because both of them were very integral to what we were doing.”

Four years ago this week, Whoopi & Maya launched with a specific focus on providing medical cannabis for people who suffered from menstrual pain. When they started the company, Goldberg and Elisabeth saw a large market opportunity in an area that not many people wanted to address, Goldberg told The Cannabist, the Denver Post’s cannabis-centric website, in 2016.
“They wanted to include menstrual cramps in the list of things you can prescribe medical marijuana for,” Goldberg said in the interview, “but the governor said that will never happen in New Jersey because our doctors only prescribe marijuana for ‘real’ pain. The fact that people think of (women’s health) as a niche market — that he didn’t think of menstrual cramps as ‘real’ pain — tells me that there’s a lot of education to do on this subject.”
The reasons for the closure of Whoopi & Maya went beyond personal fissures, Cusick said.

No special treatment for celebrities

When the company launched, California was still a solely medical cannabis market. Come November 2016, the state passed Proposition 64, which legalized adult-use sales. As the state folded in the medical cannabis regulations into the new program, it was difficult for operators like Whoopi & Maya to adapt, he said.

Read the original story on CNN.

Cannabis grew to the behemoth it is today only by the pursuits of those willing to risk their lives.

This makes it no surprise that as the industry grows and more regulation and legislation is introduced, a lot of older cannabis industry and community members aren’t too happy. But there’s a harsh reality that we all need to face if this industry is going to grow into a federally regulated industry.

The cannabis industry was partially built on advocacy, but also greed and capitalistic intent. If growers in California didn’t push themselves to grow more and more, bigger and better cannabis every year to make more money and beat the competition, we wouldn’t have the massive variety of strains and cultivars.

And you can bet your ass that some people have gotten rich as hell off cannabis, with more and more rich getting involved like celebrities, bringing more money and investment into the industry.

When the medical industry first began in Colorado, it was a small community with mom and pop dispensaries. But as recreational came into the state, so did bigger investments, resulting in dispensary chains that knocked plenty of small dispensaries out of business. It’s clear why small business doesn’t like big business, and the cannabis industry was built on small businesses, husband and wife operations, small groups of friends building something together.

But that is all changing, and it’s changing fast.

States like Colorado and California have had several years to develop their medical and recreational cannabis industries. This means that both states are also filled with highly experienced cannabis industry entrepreneurs, ready to expand.

When a state like Oklahoma legalizes medical cannabis in 2018 with legislation that actively encourages out of state entrepreneurs to get involved, people are going to hop on the opportunity. And in Oklahoma, they definitely did.

Growers, processors, dispensary owners all flocked to Oklahoma to rent their home for 30 days in order to gain residency thanks to Oklahoma’s welcoming cannabis regulations. After they got residency, it was easy to apply and get started in the medical cannabis industry in the state. After August 2019, if you want to move to Oklahoma and start a business, you must live there for two full years before you can get residency now. In other words, if you didn’t get in before August, you’ll be two years behind.

This made a lot of industry entrepreneurs happy, but pissed off a lot of Oklahoma locals hoping to have their own local industry that now have to share it with Californians, Coloradans, Oregonians and others that left their saturated markets to start fresh in Oklahoma.

Capitalism has always been a double edged sword in America, which is probably why there’s so much debate around whether or not we need a new system. It promotes innovation and progress at the cost of leaving behind those that can’t compete.

Those that were once competitors that had to shut down or move shop because someone bigger or better came in, that sucks. But welcome to America. That’s capitalism, and that is what happens when capitalism and cannabis intersect.

The reality is that with a nation-wide legal cannabis industry that we want to someday achieve (even though there are plenty who don’t want that), big business is going to inevitably get involved, and small businesses will be pushed out if they can’t evolve, adapt and compete. Get an insider’s perspective on capitalism in cannabis from two long time cannabis advocates and growers, Chip Baker and Jeff from Little Hill Cultivators on The Real Dirt Podcast!

What is Green Greed?

Green greed! It has plagued the cannabis industry for years. But today it doesn’t mean what it used to.

In our current legal cannabis industry, I have run across so many contractors and vendors that attempt to charge cannabis people more money than their “normal “clients. Maybe this is because they were overcharged for a not-so-great sack years ago. Maybe they’re just greedy.

I’ve been quoted $6,000 for a $1,000 job. I’ve been quoted $3,800 for a $900 job. Now, the joke is on both of those assholes because they didn’t get my money. But for someone not as skilled as me in construction and operating a business, you might get taken advantage of by some dubious contractors.

Here are signs that you might be dealing with a green greedy asshole.

1. If you tell a contractor you’re in the cannabis business and they clap their hands and say, “You guys must make really good money”…

2. Or they put on a greedy smile and say, “This is going to be expensive, but you can afford it”…

3. They tell you that working with cannabis businesses is too risky, and that they have to charge more to account for the risk.

The reality is that these people are probably all just jealous. We all choose our own lines of work, and they chose theirs. Remember, we’ll only work with them if we get fair rates and quality work.

If you are in the cannabis industry and you get the slightest psychic vibe that you’re getting a high quote from a contractor, immediately tell them, “No, that’s too much, I can’t afford that.“

Immediately asked them for a discount when they give you their quote. Upon meeting these contractors, call out other green greed that you have already had to deal with to show them you won’t be tricked into overpaying. Demand that you get the best price and the best service.

The cannabis industry makes a lot of money, but the people who try to take advantage from the outside don’t know where all that money actually goes. Operating costs, testing, licensing. There isn’t that much left over. Make that clear too.

It started as growers in the private market’s green greed driving up prices in tough times. Now that it’s legal, everybody can try and take a cut. Which is why it’s so important to be mindful as a cannabis business owner.

Next time you’re talking to a contractor and you hear a number that sounds a little high, don’t be afraid to call it out. As long as people get away with taking advantage of new cannabis businesses, they’ll keep taking advantage. Be cautious, be mindful and always get a second quote. 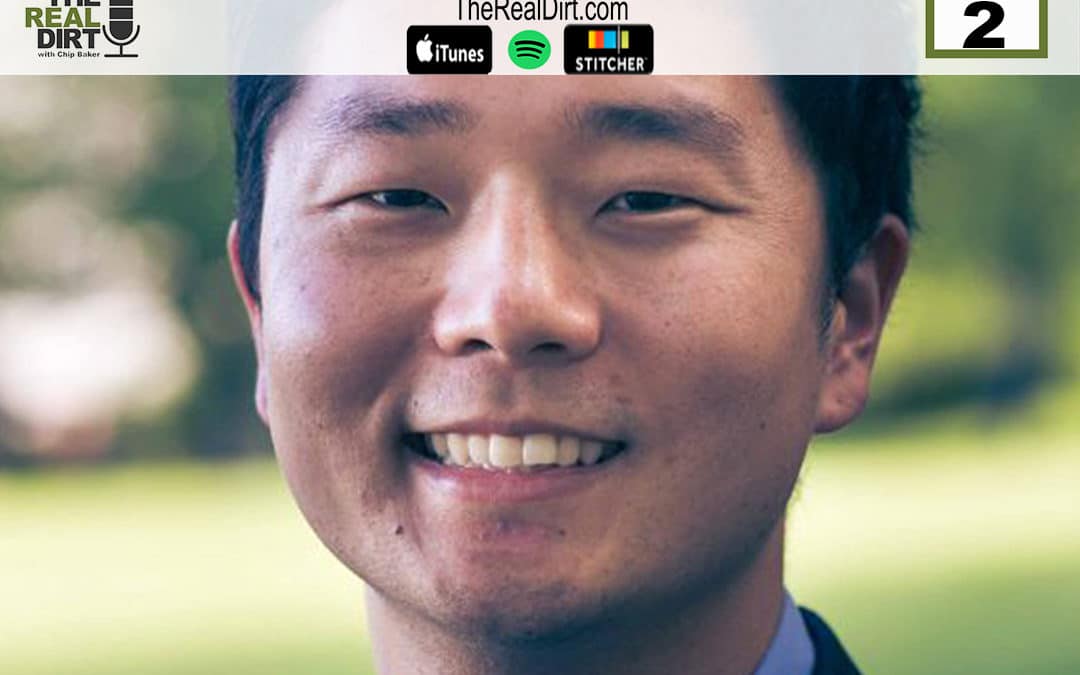 Investing in Cannabis with Louis Han 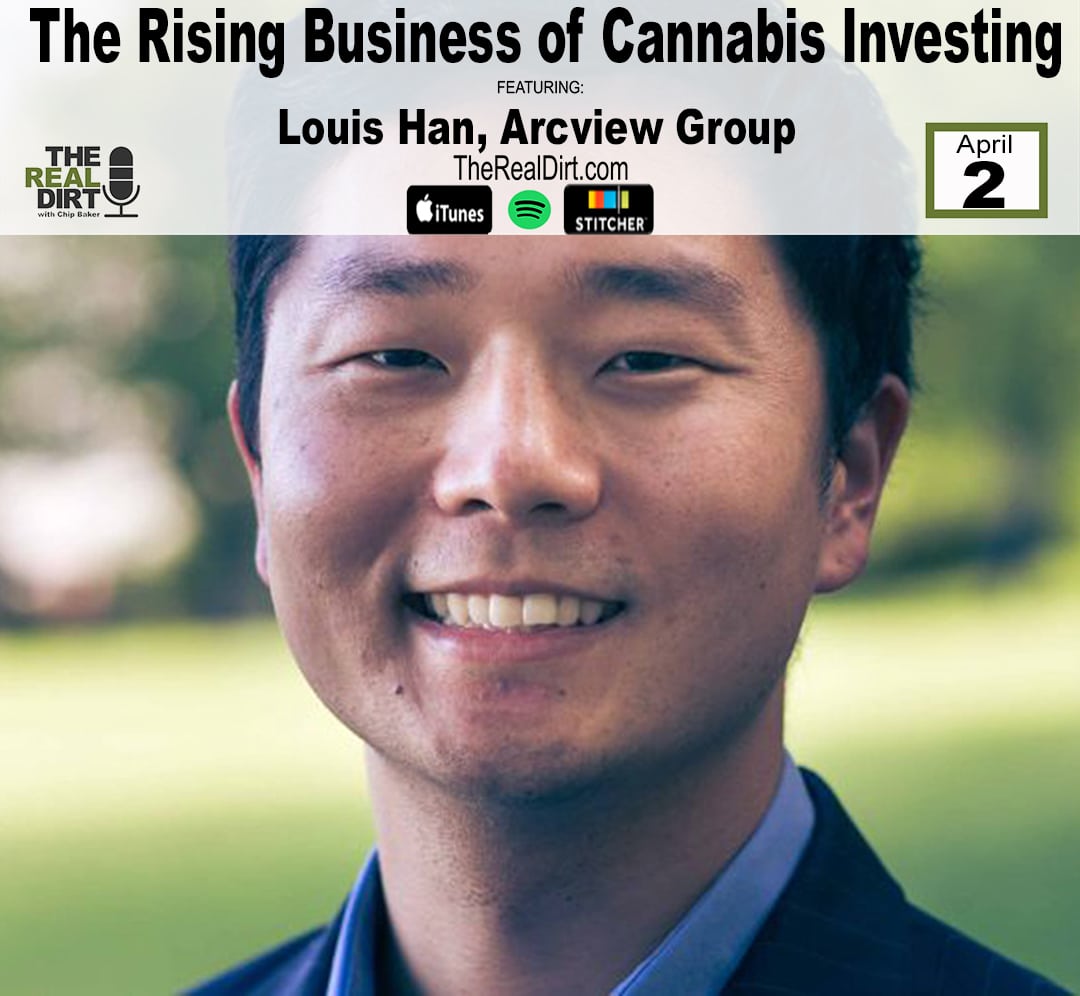 When Louis Han started at Arcview Group in 2015, the firm had only invested about $60 million in cannabis ventures. Today, they’ve invested over $250 million.

Louis Han is the Director of Deal Flow for The Arcview Group, an investment firm with a strict focus on investing in cannabis. Financing is one of the most difficult aspects of starting a cannabis business.

Louis and The Arcview Group make it easier.

Cannabis is still federally illegal. Banks operate on a federal and state level. This makes most banks averse to the idea of loaning money to new cannabis businesses, even if they operate within a legal cannabis state.

The Arcview Group negates the need for cannabis entrepreneurs to go to banks at all. With its massive investor network, from small scale angel investors to big money opportunists, Arcview can invest in cannabis businesses big and small.

While the opportunity to start a business in the cannabis industry has never been more possible, investors are still limited, and competition to obtain investment is fierce. This means Arcview can’t just invest in anybody. That’s where Louis Han comes in.

As Director of Deal Flow, an aspect of Louis’ job consists of vetting businesses seeking investment. There’s a lot of people looking for financial assistance, but only the most promising will get to interview with Arcview investors. Louis has seen some of the most successful cannabis businesses go through Arcview.

Louis Han is a cannabis investment expert. In this week’s episode of The Real Dirt, Chip and Louis talk over the phone about investing in cannabis and hemp. From how to formulate your pitch to reading your audience, Louis and Chip go through the full investment process.

In the words of Louis, “Getting involved with an investor is almost like getting married. Especially if they own a large portion of your business, they can have an impact on your financial decisions, and the way your business runs.”

If you’ve been considering seeking investors for your cannabis business, this an episode you’ll want to hear. And check out Arcview Group’s Investor Meeting happening in Canada on April 23rd!