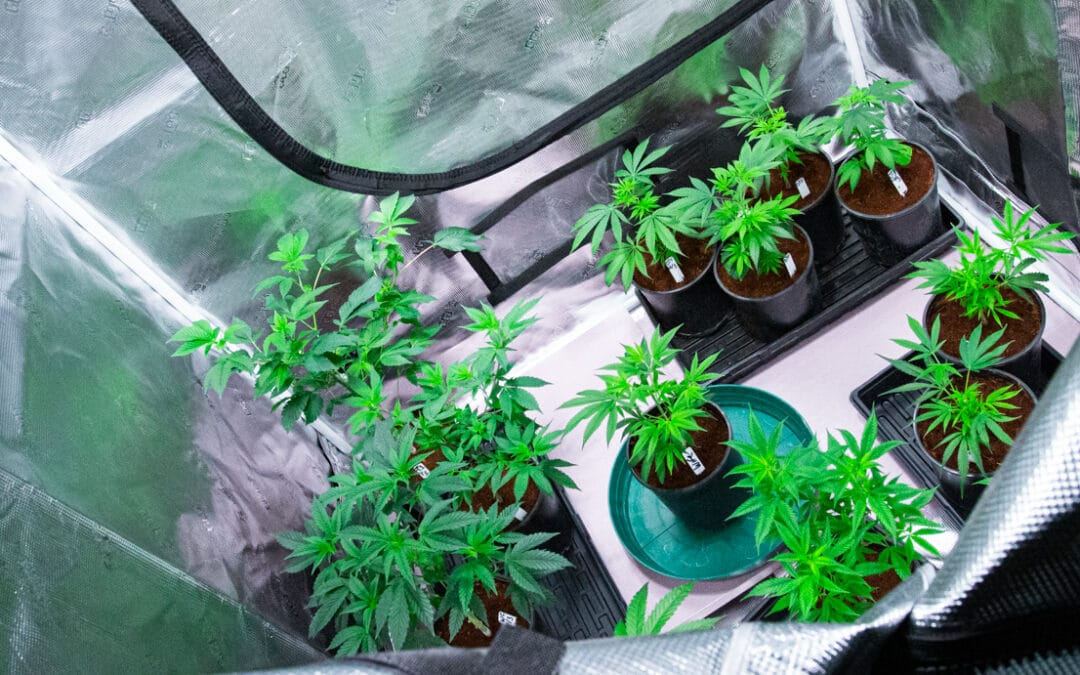 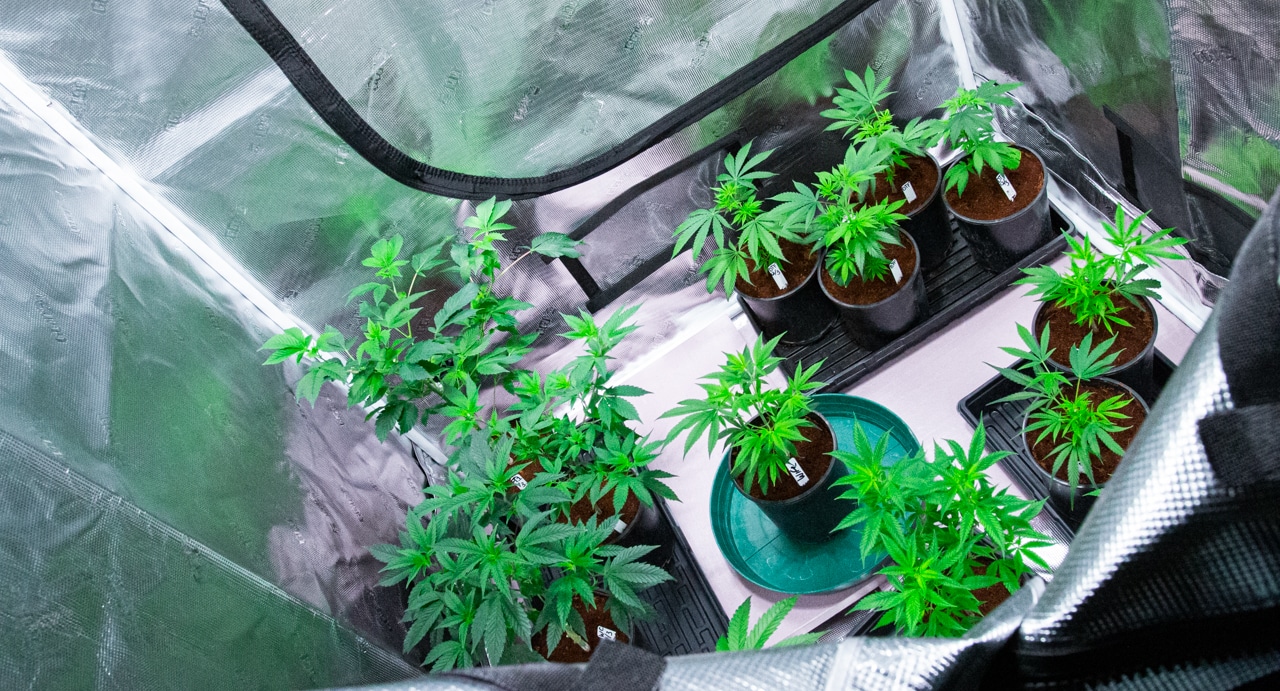 Growing indoors is a great way to protect your plants from the conditions of the outdoors. But finding the right spot for your plants inside without a specific space set aside can be difficult.

With an indoor grow tent, not only can you grow your plants indoors in a secure space. A grow tent also gives you even more control over the environment your plants will grow in throughout their cycle.

When choosing a grow tent, the main factors are the size and features. An average indoor grow tent will be 4′ x 4′ x 6.5′, which is a great compact size that still allows for optimal growth due to the height allowance.

To make everything easier, look for a grow tent with adjustable ports for vent fans/ducting, screened vent panels, and an adjustable power cord port. Growing in a tent will still require HVAC and lighting, and you don’t want to have to cut holes out yourself and risk tears that can lead to light leaks or temperature fluctuations.

The Lighthouse 2.0 Controlled Environment Tent is the perfect all in one tent, with all the above mentioned features. It also comes in a 4′ x 8′ x 6.5′ size for a wider area allowing more plants.

There are also smaller and even larger options for indoor grow tents. However it all depends on the size of your space, how many plants you want to grow and how much energy you’ll be able to provide through supplemental lighting and ventilation.

Once you have chosen your grow tent, it is time to get it set up.

Setting up your grow tent

Setting up an indoor grow tent is easier than setting up IKEA furniture, but it’s not always as easy as snapping a few corners and velcro together. Some grow tents might be made easy to assemble, while others have poles and joints that must be connected through the fabric of the tent to hold it up.

But we’re going to focus on setting up the tent once the frame has been built. This mainly involves setting up your lighting and ventilation using the vent ports and the support poles at the top of the tent.

In a smaller grow tent, air circulation can be taken care of easily with some clip on fans in the corners of the tent. However, additional ventilation like a carbon filter will need to be fed in through a vent port and supported if hanging in the tent.

This can include the carbon filter itself, plus an inline fan, tubing and the needed hardware. Ensuring that your carbon filter is supported and set up properly is going to make a big difference.

If your tent doesn’t have any built in ports to feed your tubing and wiring through, you may need to cut them yourself.

The lights you use will also depend on the size of your tent and how many plants you have. Check out our guide for finding the best grow light to make sure you don’t spend too much on a light that won’t cut it or damages your plants!

Aside from these two essentials, the customization you add to your grow tent is really up to you. The less plants you have, the more grow gear you can fit in with them like environmental controllers or a standing fan if you have larger plants.

Irrigation can also be useful in a grow tent for those who want to automate and maximize their efficiency. But in a smaller tent hand watering is likely easier and cheaper with just a few plants.

The biggest benefit of an indoor grow tent is that it gives you an environmentally controlled space wherever you want. No designing a grow room in your house or apartment required.

With ventilation, lighting, and water, your plants are ready to go in a secure, sealed environment.

Get More Grow Tips and Grow Gear from Cultivate

The History of Grow Lights and the Rise of LEDs

Lighting for indoor plant cultivation has evolved exponentially over the last twenty years.

A focus on creating the most cost-effective grow light has led to new technology and lighting applications that boost yields and produce way higher quality plants.

As long as electricity has existed, people have likely tried growing plants indoors. However most had no luck, as the power of lights back then was so minute compared to the power of the sun that growing indoors didn’t make any sense to the average farmer.

Jump ahead a couple hundred years and into the 20th century, and everything began changing. Cultivation techniques advanced, and so did technology.

The History of Grow Lights

The first patent for the next evolution of grow lights would be for the Metal Halide bulb, patented all the way back in 1912! But it wouldn’t be until the 1960s that this invention saw more practical, widespread use for cultivation. At this same time in 1962, LED lights would be invented. Remember this for later.

The metal halide bulb would act as the catalyst for the beginning of grow-light technology innovations, with High Pressure Sodium lights coming into the fray only four years after Metal Halide. With a higher wattage capability and stronger light spectrum, HPS lighting became the industry standard for decades.

However at this point, most growers were still just hanging bulbs from their ceilings. Also, the only bulbs available were 600 Watts or 1,000 Watts.

More innovation followed the introduction of HPS lights, like ballasts and reflective hoods to increase coverage and power and Ceramic Metal Halide bulbs in 1994, but in 2010 everything changed.

Through all this innovation and technological advancement, LED Lights were slowly gaining steam in the background. Used primarily for home or commercial lighting, over the last decade LED lights slowly began breaking into the agricultural industry.

With more developments in LED tech over the last ten years, fixtures have been created that are now viable for commercial scale indoor cultivation. As innovators in the lighting industry, Gavita released their state of the art LED grow light in 2019 to revolutionize indoor cultivation yet again.

We are now entering what some would say is an infancy stage for LED grow lights. They are growing in popularity among home growers, but commercial and large scale growers are slower to see the appeal. Pair that with a high price point for quality LED lights and its easy to understand why they aren’t widespread quite yet.

Are LEDs Worth the Price?

While LED lights for cultivation are becoming more mainstream and effective, they definitely aren’t the cheapest option. CMH and HPS lighting have been the industry standard, which means more companies have produced economical options for growers at all levels.

Because LEDs have yet to become commonplace, the two options for growers are well-made lights that are proven to work from companies like Gavita for a higher price tag, or cheap, low quality LEDs typically produced in China. For the indoor grower with just a few plants, a cheaper light can get the job done, and it won’t break the bank when you need a new one after it inevitably breaks or malfunctions.

While a large scale grower can greatly benefit from using LED lights and they may even pay themselves off in time, a lot of cultivators can’t justify the high price point when HPS and CMH lights can do a great job for cheap in comparison. Over time the prices of LEDs will drop just like HPS did, and in a few years they will be just as common for growers, hopefully!