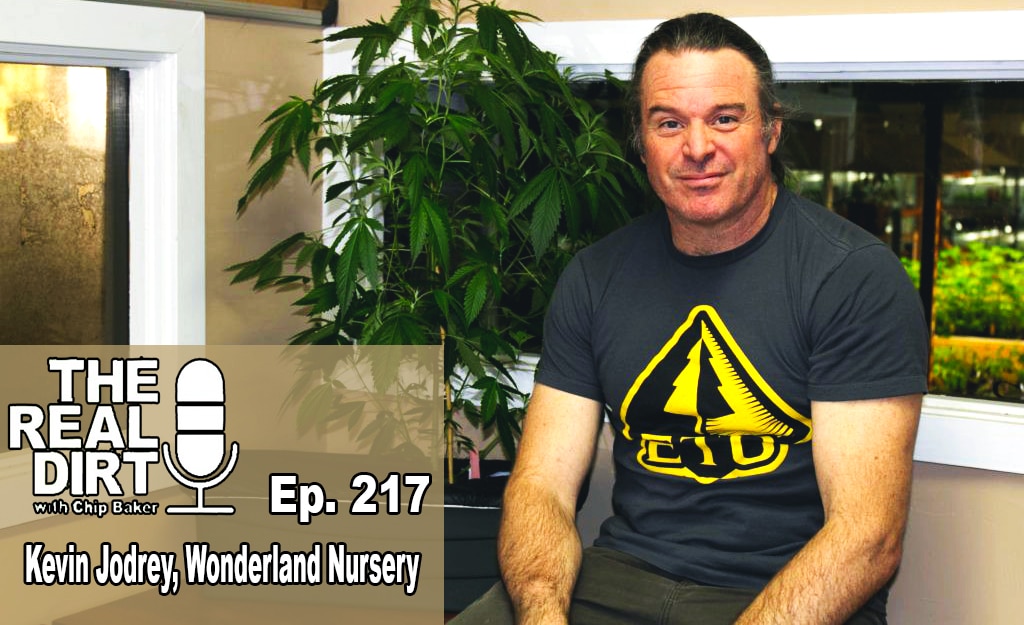 On this week’s episode of The Real Dirt, Chip recovers a lost interview with Kevin Jodrey of Wonderland Nursery.

Kevin is the head of cultivation at Wonderland Nursery, one of the top clone nurseries in the country. Nestled in southern Humboldt, Wonderland Nursery provides some of the finest clones as well as consulting and helping out other growers in the region and across the nation.

An old-school purist, Kevin puts his focus into knowing the plant that is cannabis, as well general plant biology and its relationship with soil and human interaction. His humbleness is obvious when he talks about growing his top-tier strains, resulting in some of the most in-demand clones in the industry.

Kevin Jodrey is one of the most well known growers in Humboldt County and is an internationally respected cannabis expert, known for improving and forwarding the modern cannabis movement. As a world renowned hunter of ganja genetics, Kev is fascinated by the search for rare, desirable, and marketable traits.

Kevin is the creator of Port Royal, owner of Wonderland Nursery, and co-founder of The Ganjier. He’s been a cannabis cultivator for decades, running his own operations and offering consulting services to the broader community. He’s spoken at universities, judged at the Emerald Cup, and consulted on cannabis related educational shows for National Geographic and A&E.

Featured in the New York Times, a pulitzer prize winning Washington Post article, countless other articles, books, and radio, and tv shows, he is at the epicenter of the Green Rush (and graces the walls of the Oakland Museum to prove it) and is guiding the industry as it transitions to legalization.

Listen to Kevin in this week’s episode of The Real Dirt where him and Chip talk clones, changing laws, and the future of the cannabis industry!