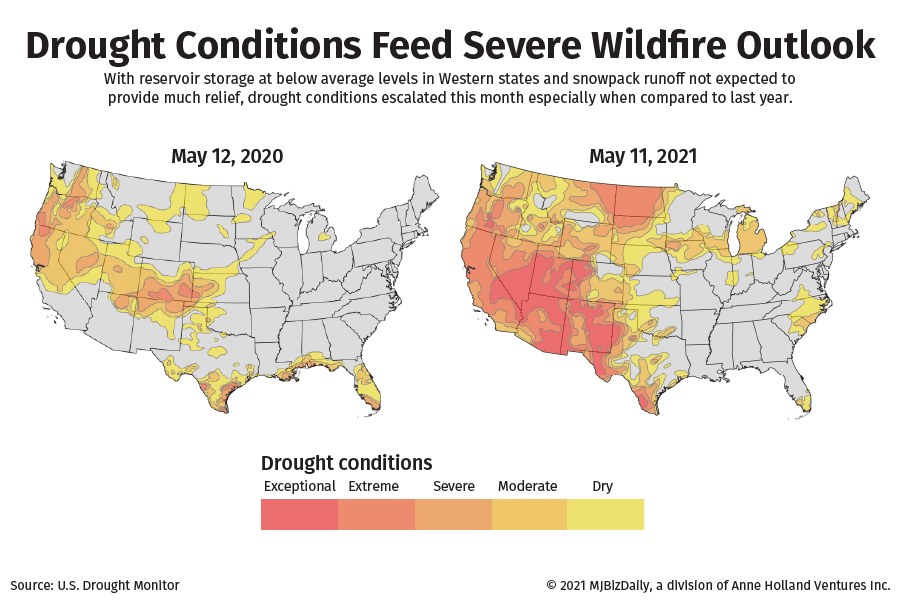 Historic drought conditions again will bring the threat of extreme wildfires to U.S. cannabis growers, especially those in Western states.

Wildfires and the ash and smoke created by them are becoming a bigger threat to life and property as average temperatures rise and water resources dwindle amid climate change.

Western states experienced historic destruction in the summer of 2020, when everything seemed to be on fire, including cannabis farms in California and Oregon.

Smoke and ash also blocked out essential sunlight and delayed the growth of outdoor marijuana plants by weeks, leaving growers with less-than-ideal options for when to harvest their plants.

Last season’s 58,950 wildfires burned 10.1 million acres across the United States, double the acreage burned in 2019 and almost 2.3 million more acres than the 10-year-average.

But that is not uncommon.

California had its worst wildfire season on record, with an estimated 4.3 million acres burned, 33 fatalities and 10,488 structures damaged or destroyed.

And the conditions that feed large wildfires already are worse this year.

Reservoirs across much of the West are sitting at below average levels, and snowpack runoff is not expected to provide much relief.

The situation is similar in California and Colorado.

In fact, the amount of water in the snowpack has dropped to below normal for much of the West, excluding parts of Alaska and Washington state.

The U.S. Drought Monitor’s latest outlook, released last week, shows that much of the area where cannabis is grown in the West and Southwest is experiencing extreme and exceptional drought conditions, which can lead to water emergencies and widespread crop and pasture losses.