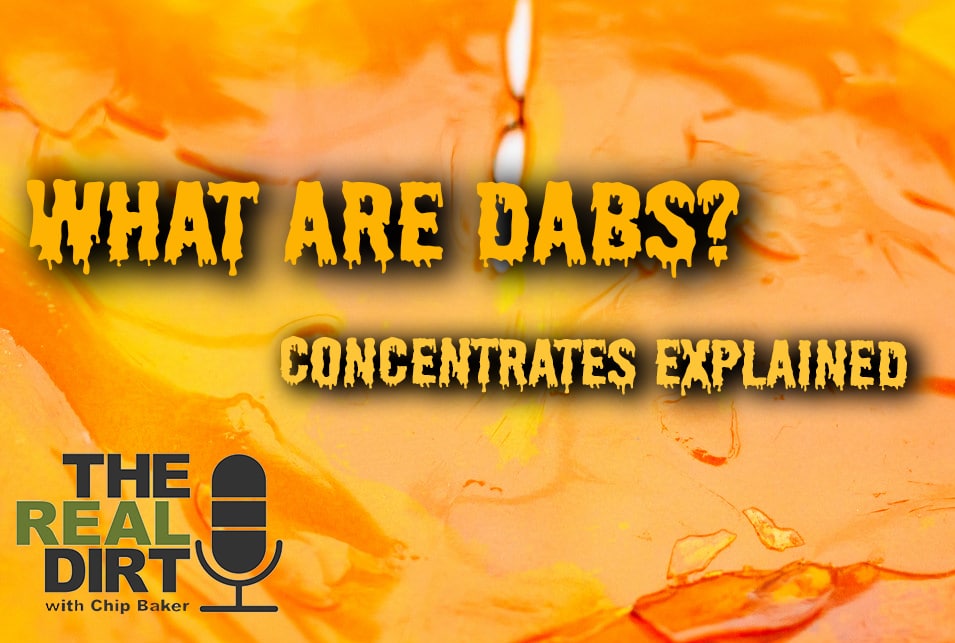 What Are Dabs? Concentrates Explained

Concentrates are almost as popular as flower cannabis now. But what is a concentrate?

It’s simple at first glance. A dab or concentrate is just that; the concentrated form of the main chemical in cannabis that produces psychotropic effects, THC. Due to it’s potency, all that is needed to get the full effect of concentrates is just a dab. But how those inevitable dabs are made can vary from the methods to the solvents used in the extraction process.

When extracts — which would eventually be more commonly referred to as concentrates or dabs at dispensaries — first started their rise to popularity, the main solvent used was butane. Because butane is so cold, the gas iss able to stick to the THC crystals of cannabis flower and pull them off the plant, without taking any other chemicals or plant matter.

Through this process of butane extraction, we got the first concentrates that would push them into the spotlight for their clean, pure taste, with effects that pack a punch. 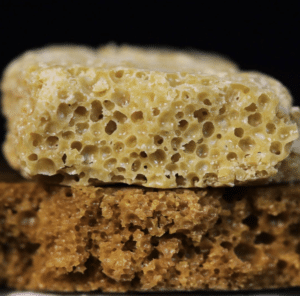 The simplest and earliest form of concentrate, wax is most commonly made with Butane, although CO2 and even propane extraction has become more prevalent. The way wax is made is very similar to shatter or crumble (another form of wax), but the results vary significantly.

The difference in wax compared to other concentrates, is that it is purged of solvents at a higher temperature and then whipped like a batter toward the middle or end of the purging process. Avoiding the whipping results in another concentrate still very popular; shatter. 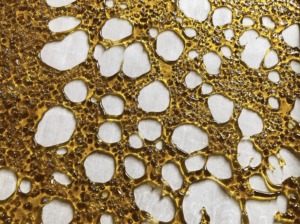 A slab of shatter. Photo by @bigcat_concentrates.

Shatter is most popular for how it looks. It’s name comes in part from those looks. Shatter typically looks like a piece of golden-brown glass. This happens when extractors let the concentrate sit during the purging process without any agitation (as opposed to wax which is highly agitated), allowing the concentrate to harden into a thin sheet of glass that eventually becomes shatter.

Due to its structure, shatter can be very brittle and break at the touch like glass, but it can also be made more malleable, which makes it easier to manage. Shatter with a more sappy consistency can also have more terpenes and other beneficials that might be carried over if made more brittle. 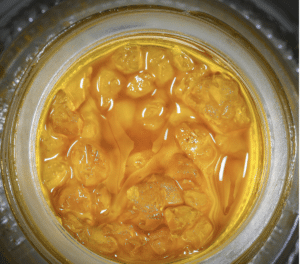 A jar of live resin from Green Dot Labs

One of the newest extraction methods on the market, live resin is different from any concentrate that came before it, and because of this, is taking over the concentrate shelves at local dispensaries. Live resin is made in the same way as wax or shatter, but the plant matter used is what makes the difference.

To make a live resin concentrate, extractors will try to keep the plant as close to alive as possible after cutting it down in order to preserve its living terpene profile. This is usually done by cryogenically freezing the plants as soon as they are chopped, preserving all the oils, cannabinoids and terpenes that are normally purged out during the curing and aging process. 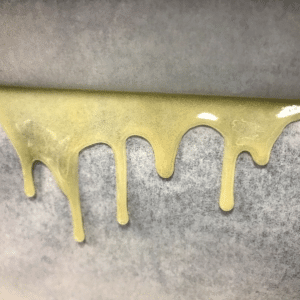 Rosin rose to popularity very quickly, simply due to how easy it is to make. What started as a small basement trend of people sharing videos of them pressing their cannabis with a hot hair straightener in order to press out the natural oils from the plant, has evolved into an entirely new subset of the concentrate industry.

Rosin is one of the first solvent-less extracts, meaning there is zero risk of encountering any leftover butane, propane, or CO2, because it was never used in the first place. Making rosin is as simple as getting a hair straightener and some parchment paper, leading to one of the largest home-extraction movements of the booming industry.

While rosin may not be as potent as other concentrates, and its consistency can be difficult to deal with, many flock to dispensaries for this clean concentrate for the peace of mind in knowing there were no potentially harmful solvents used in the making of the product. The flower itself that is actually pressed to make rosin, is a different story. 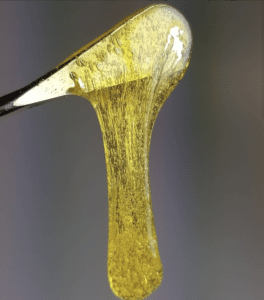 A glob of distillate from @TheClearConcentrate

Distillates are made through a process called molecular distillation. Distilling hash requires taking winterized concentrates — butane or CO2 hash oil refined with alcohol or ethanol and then chilled at extreme temperatures — and then distilling them to concentrate the THC further. Commercial extractors use a machine called a “wiped film evaporator,” which takes advantage of the different boiling points in cannabinoids to thermally separate them.

Extractors will then repeat this process to remove more and more impurities like leftover solvents. The result of this process is a clear, clean concentrate with no smell and virtually zero solvents. By taking a butane hash oil with a THC content between 70 and 85% and distilling it, the result can reach potencies of up to 95%. However, for the big punch this concentrate packs, it lacks the flavor and diversity of the other concentrates in this list.

No matter what type of dabs or concentrates you decide to enjoy on 7/10, the national holiday of concentrates, remember to start small and pace yourself with dabs. A little too much and you’re holiday will be ending early with a nap.
1