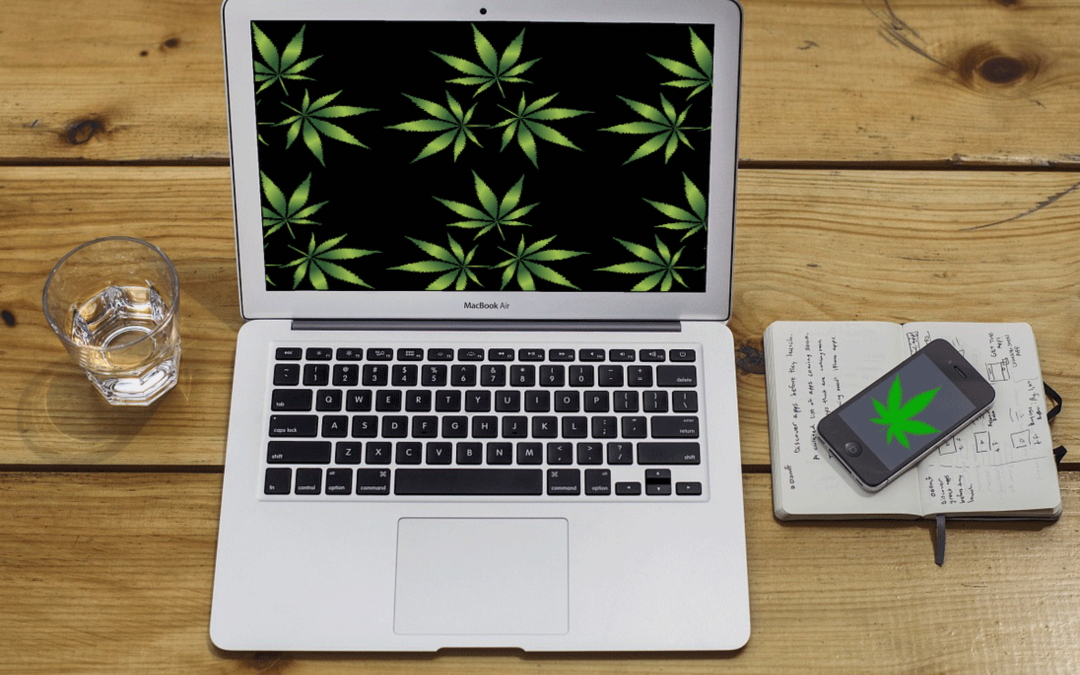 The cannabis industry is hiring. It isn’t broadly advertised or promoted on the online job board like other more common jobs, however, which can make finding them difficult.

In addition to the difficulty in finding jobs, applying for certain jobs in the industry will have mandatory requirements from obtaining a license to paying a fee in order to qualify. As someone who went through the process of finding a job that resulted in me moving from Pennsylvania to Colorado, I have some tips for finding jobs easier and making your application stand a better chance of getting that second look. 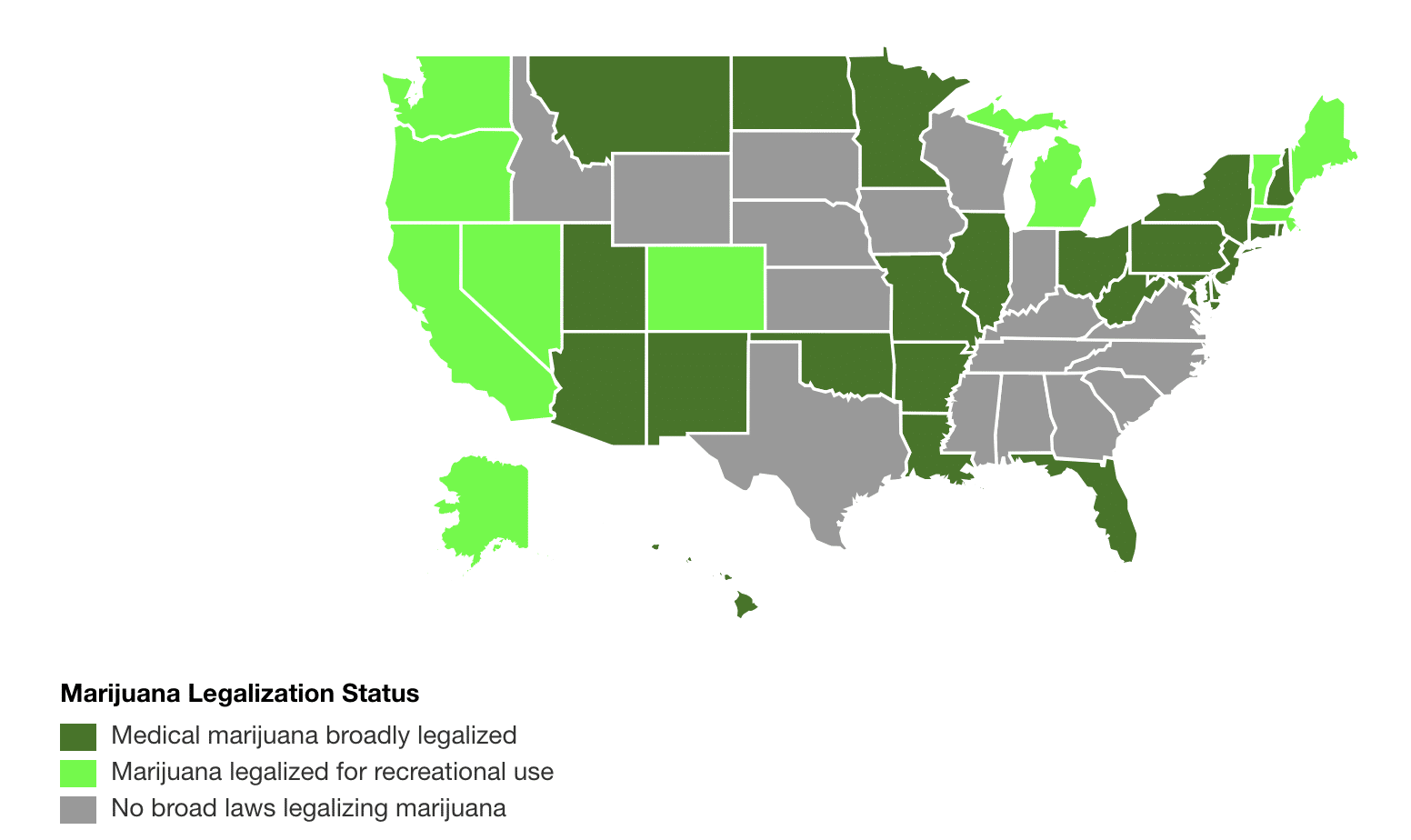 If your state is highlighted on that map, there’s a chance someone nearby is hiring. Look for local dispensaries or distributors and give them a call. Most dispensaries in younger legal states will be mom and pop shops or smaller scale, and thus not putting out lengthy ads on the job boards.

The cannabis industry, recreational especially, is still in its infancy in the US. This means a lot of states that recently legalized medical or recreational cannabis may still be setting up their industry, and thus not hiring in large numbers. Instead, look to the places that have had legal cannabis for a while.

Colorado, Washington, and Oregon have all developed their markets to a point of stability, for the most part. Although Oregon is certainly not in need of any more growers, there is other opportunity to be found in processing, distribution or retail.

While technically still very young and new, California is very likely looking for qualified candidates right now. California has been operating in a grey market since the medical industry exploded, with private market sales creating entire businesses and supply chain. These businesses were for the most part able to transition into the legal industry, and now they’re hiring.

Look up the most popular cannabis jobs in the state you choose or simply google “cannabis jobs california” to see what the job boards have to offer.

3. Think about what you can do

When it comes to applying for cannabis jobs, it helps to think in terms of not what you want to do, but what you can do. It might not sound like the stereotypical “follow your dreams” advice, but with limited jobs and a lot of applicants, you can’t be too picky when looking for cannabis jobs.

All of my experience was in public relations, social media and content, but I was looking at and applying to growing jobs, budtending jobs and even trimming jobs. This doesn’t mean throw out your dream of being the next big cannabis marketer, because those jobs are there too. They are just much harder to find, and it can be disheartening seeing all the lower level jobs and not the ones you really want.

California has no mandatory requirements for entering the recreational cannabis industry as an employee. Nevada, however, requires you to study, take an exam, and pay a fee in order to obtain a license to work in the Nevada cannabis industry.

The last thing you want is to go through an application process only to find out you don’t meet the one essential criteria for the job. I wrote a guide that goes through all of the requirements for the most prevalent states with cannabis jobs. Look it over to make sure the state you’re applying in doesnt’t have a hidden requirement you might have overlooked.

It’s boring, and it can be time consuming, but it’s essential. If you are looking outside of the cannabis space for jobs as a fallback option, you most likely have two separate resumes that you will be sending to potential employers. One “clean” resumé that covers your professional skills (or whatever), and the other you send to the cannabis jobs.

This resumé will have your grow experience, cannabis knowledge and other skills that would most likely instantly disqualify you from any other job. And like I said, apply to everything. You can always so no to a job offer, but not if there’s no job offer in the first place. This is where you might have to swallow some pride and apply to jobs you would never actually take.

Think of these applications as practice. Learn what kind of questions cannabis jobs employers might ask in interviews and what they are looking for in an applicant. This helps you to prepare for the jobs you really want, and you’ll be ready to answer the questions the employer has for you when you get that interview.

I was in the final stages of the application process for a job doing social media for a children’s museum in Baltimore. I would have gotten that job too, had I stuck around. My point is, there will always be a “safe” option to fall back on. Too many people take that option.

If that’s you, the cannabis industry isn’t for you anyway. There is risk in working in this industry, and a lot less job security than your everyday office job. With that said, you have the opportunity to get involved in a new and growing industry that the majority of people are too afraid to enter in the first place. You already have an advantage.

It took me over six months of applying to cannabis jobs and “safe” jobs before I was offered a job in Colorado, and even when I was offered the job, I still was hesitant. Our society puts a strong emphasis on pursuing the safe option. Breaking that instinct can be hard. But all I can say now that I’ve been in Colorado for almost a year is that it is worth it.

If you have been looking at cannabis jobs here and there, thinking about how cool it would be to actually get one of those jobs, it’s time to start applying. You might be thinking you’re not in the right state to find a job, or you missed the “window” to get in on the ground level. Those excuses passed through my mind multiple times too. Ignore them and keep applying.

The worst thing that can happen is you’ll be one of the few that can say they at least tried.

Hear my story of how I made the transition from Pennsylvania to Colorado in this week’s episode of The Real Dirt! I talk about the problems with finding cannabis jobs right now, how I got mine, and how you can too. 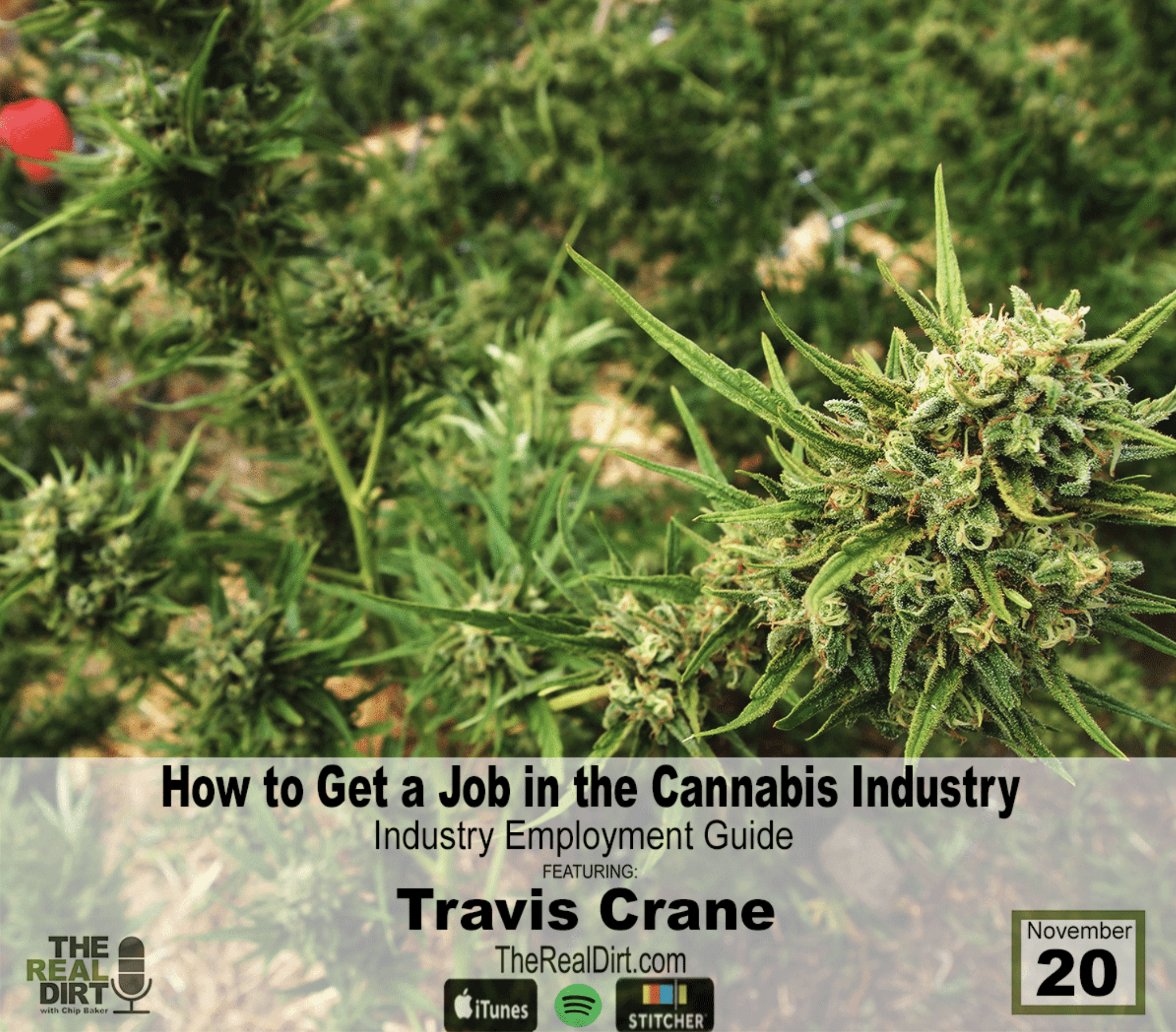 There’s a lot of cannabis industry jobs out there. They’re just hard to find.

There are now more than 30 states that have legalized cannabis for medicinal or recreational use, and the jobs are there if you are willing to look. Due to its stigmatized nature and lack of advertising, finding cannabis industry jobs can be tough, especially in states that have just recently opened their markets.

States like Massachusetts and Michigan are both projected to be highly successful markets. But whereas Michigan just legalized with plans in place for a recreational marketplace within one year, Massachusetts has been legal for two years and has yet to open a dispensary, although that looks to be changing soon.

Every state has set up their legal cannabis markets differently, whether medicinal or recreational. Colorado has one of the most effective and respected programs, and it is highly regulated. California on the other hand has much less restrictions on working in the industry, but a more difficult process of starting a cannabis business in the state.

The more you know about each state’s laws, the easier it will be to decide where you want to work, and what you want to do. Some states are only giving out licenses for growing and extracting, while others have given them all out, and now just need budtenders. Some states require you be a state resident to work in the industry in that state. Other states have no such requirement.

Another way to learn about getting into the industry from the outside is to hear the story of someone who did just that…me!

This Week on The Real Dirt

If you didn’t notice by the author line at the top, I’m Travis, and I’m the guest on this week’s episode of The Real Dirt.

It wasn’t easy for me to find a job in the industry, especially from the east coast. It will be hard for you too, but it’s not impossible. You don’t need to pick up and leave with no job security and hope you find something. You just have to look. Hard.

It took me at least 6 months of doing unrelated jobs on the side and looking for cannabis-related jobs before I actually found The Real Dirt. So don’t give up.

My story isn’t anything special. I saw an opportunity and went for it against odds, and succeeded. Now I’m writing this trying to help you get past the point I was stuck at too! If you want to hear more about me and how I ended up 2,500 miles away from all my family, listen to my episode of The Real Dirt!

Plus, I wrote a nice Industry Employment Guide that goes into detail about the fastest growing cannabis industries in the country, and all of the requirements for working in them. Please check that out, download it, print it, frame it, burn it, whatever you want. But it will help you understand the basics of these state’s respective industries should you decide to start looking for a job.

I hope you get something out of this episode and the industry guide, and as always you can ask me any questions at Travis@therealdirt.com, or talk to me on Instagram! I run both Cultivate Colorado’s and The Real Dirt’s Instagram accounts, and I LOVE TALKING WITH FANS!