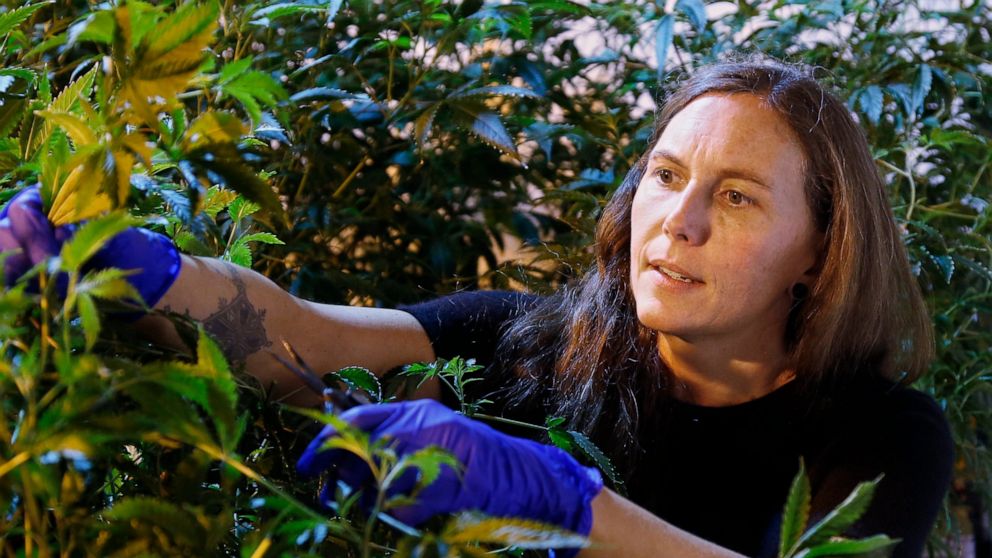 Pot entrepreneurs flocking to the Bible Belt for low taxes

Jessica Baker takes a cutting of a plant at the Baker’s marijuana nursery at Baker Medical, Wednesday, Feb. 26, 2020, in Oklahoma City. When voters in conservative Oklahoma approved medical marijuana in 2018, many thought the rollout would be ploddingly slow and burdened with bureaucracy. Instead, business is booming so much cannabis industry workers and entrepreneurs are moving to Oklahoma from states with more well-established pot cultures, like California, Colorado and Oregon. (AP Photo/Sue Ogrocki)

OKLAHOMA CITY — From their keen taste for sun-ripened pot to their first meeting at a pro-marijuana rally in college in the 1990s, everything about Chip and Jessica Baker fits the stereotype of cannabis country in Northern California, where they lived for 20 years.

Jessica, with wavy hair that falls halfway down her back, is a practicing herbalist, acupuncturist and aromatherapist who teaches classes on the health benefits of cannabis. Scruffy-bearded Chip wears a jacket with a prominent “grower” patch and hosts a marijuana podcast called “The Real Dirt.” They started their pot business in rugged Humboldt County when it was the thriving epicenter of marijuana cultivation.

But the couple bid goodbye to the weed-friendly West and moved somewhere that might seem like the last place they would end up — Oklahoma.

They’re part of a green rush into the Bible Belt that no one anticipated when Oklahoma voters approved medical marijuana less than two years ago. Since then, a combination of factors — including a remarkably open-ended law and a red state’s aversion to government regulation — have created such ideal conditions for the cannabis industry that entrepreneurs are pouring in from states where legal weed has been established for years.

Though 11 states have fully legalized marijuana for recreational use, Oklahoma’s medical law is the closest thing to it: Anyone with any ailment, real or imagined, who can get a doctor’s approval can get a license to buy. It’s not hard to do. Already, nearly 6% of the state’s 4 million residents have obtained their prescription cards. And people who want to sell pot can do it as easily as opening a taco stand.

“Oklahoma is really allowing for normal people to get into the cannabis industry, as opposed to other places where you need $20 million up front,” said Jessica Baker.

The Bakers have a marijuana farm about 40 miles (65 kilometers) from Oklahoma City, along with a dispensary, nursery and gardening shop in a working-class part of town where virtually every vacant shop and building has been snapped up by weed entrepreneurs in the last year.

When he leased his place, which had been vacant for 10 years, Chip Baker said, “to celebrate, the owner went to Hawaii for a month.”

Unlike other states, Oklahoma did not limit the number of business licenses for dispensaries, growers or processors.

In less than two years, Oklahoma has more than 2,300 pot stores, or the second most per capita in the U.S. behind only Oregon, which has had recreational marijuana sales for five years. Oklahoma has four times more retail outlets than more populous Colorado, which pioneered full legalization.

“Some of these states are regulating cannabis like plutonium,” said Morgan Fox, a spokesman for the National Cannabis Industry Association, the national trade group for marijuana businesses. “And the financial burdens that are placed on licensed businesses are so onerous, that not only is it very difficult to stay in business, but it’s also very difficult for the legal, state-regulated systems to compete with the illicit market.”

Marijuana taxes approach 50% in some California communities and are a factor in some business closings.

California requires a $1,000 application fee, a $5,000 surety bond and an annual license fee ranging from $2,500 to $96,000, depending on a dispensary’s projected revenue, along with a lengthy application process. Licenses can cost $300,000 annually.

In Oklahoma, a dispensary license costs $2,500, can be filled out online and is approved within two weeks.

Arkansas, next door to Oklahoma, also has medical marijuana, but like most such states, it allows purchase only for treatment of certain diseases, such as glaucoma or post-traumatic stress disorder. It also requires a $100,000 surety bond. Louisiana, which also tightly restricts prescriptions, has only nine licensed dispensaries.

Ford Austin and his sister opened the APCO Medical Marijuana Dispensary in a gentrifying part of Oklahoma City after he gave up on plans for a California weed store. “There’s way more opportunity here,” he said.

Sarah Lee Gossett Parrish, an Oklahoma attorney specializing in cannabis law, said about 15% of her cannabis clients are coming from out of state.

“I frequently receive calls from people in the cannabis industry in California,” Gossett Parrish said.

People in some rural towns are worried about the Wild West atmosphere of the boom, particularly where shops with funny weed-pun names, waving banners and blinking signs have opened near schools and churches.

A Republican state legislator, Jim Olsen, has proposed a bill banning dispensaries within 1000 feet (305 meters) of a church. “While I recognize that some people do find pain relief from medical marijuana, with children we really don’t want them to think that when they reach problems in life, that marijuana is a good answer to that.”

But Republican Gov. Kevin Stitt and the GOP-controlled Legislature have shown no interest in reining in the industry since the ballot measure authorizing it passed overwhelmingly. The industry has mostly fought off local attempts at zoning.

Many communities are welcoming cannabis shops because of the sales tax revenue. In college-town Norman and in Oklahoma City, at least a half dozen businesses have joined the chambers of commerce.

“In our community, I think most businesses view them as equals,” said Scott Martin, president of the Norman Chamber of Commerce. “We’ve even had a handful of ribbon cutting ceremonies.”

Even some longtime opponents of marijuana legalization have softened their tone.

Sheriff Chris West in Canadian County, one of many law enforcement officers who decried the 2018 legalization ballot measure, says a number of farmers he knows have decided to switch crops.

“I’ve had them call me and tell me, ‘Sheriff, we’re going to venture into this business and we’d like for you to come out and see our facility, because we want you to know what we’re doing.’ And these are longtime, good, godly, Christian families that see it as an income opportunity.”