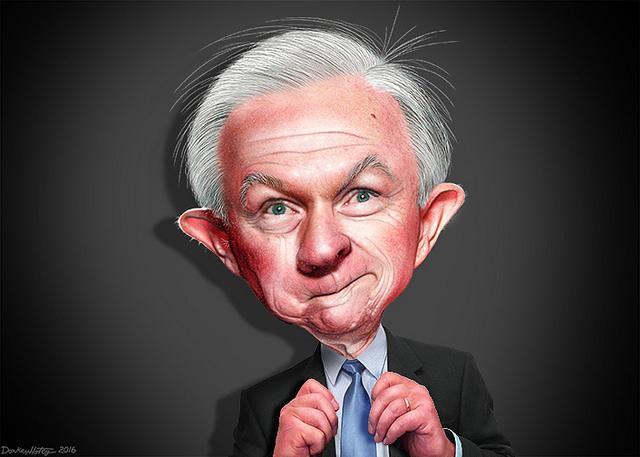 Jefferson Beauregard Sessions III. A fittingly obnoxious and frustrating name to match the unbearable character of the United States Attorney General; the same man that is single-handedly attempting to take down the recreational and medical marijuana industries.

It’s no surprise that Jeff Sessions, whom even Trump now wants to quit, would take such a negative stance on the medical marijuana industry as well as the legal market. Considering he is a conservative with ties to the private prison industry, in which almost half of the drug-related crimes for which people are placed in these prisons is marijuana-related, one can’t be too shocked that he would take this path.

With restrictions on private prisons all but removed completely, Jeff Sessions has set his sights on one of the fastest growing markets in American history. Marijuana still maintains a Schedule 1 status federally, meaning it has a high risk of abuse with no accepted medical use and lack of accepted safety for use under medical supervision.

Although I do agree with the last part about lack of safety for use, that is only due to its schedule status which makes it near impossible for research funding and efforts to create a safe all-encompassing set of guidelines for the industry. Ironic, I know.

What is even more ironic is the fact that a conservative government – which if I recall correctly from my gen-ed history courses in college is meant to be small and hands-off with state decisions – would want to go after states that have deemed in their laws the legal or medicinal use of marijuana. So much for respecting the states, right Jeff?

While we appear to be in the midst of the largest opioid epidemic in our country’s history, Sessions insists that marijuana is a growing flame that needs to be snuffed out, citing increased violence as his reasoning. Maybe I’m crazy or I’m not seeing things properly because I smoke a little too much, but I can’t recall any recent breaking news stories of someone getting stabbed or shot over some marijuana, let alone any reported death from a marijuana overdose in the history of recorded human existence.

Mr. Sessions has taken it upon himself to begin the process of rolling back the Obama administration decision that restricted federal funds being spent on efforts to counteract state’s legal measures regarding medical marijuana. To sum up this federal budget change, the administration basically told the DEA and other drug task forces to leave alone states that decided to legalize marijuana whether medicinally, recreationally or both, despite the federal status.

Jeff Sessions is Stuck in the Past

Now I can see how an old traditionalist such as Jeff Sessions might be scared and nervous that the younger generations are recognizing the vast medicinal benefits of marijuana, such as its use in aiding those with epilepsy, insomnia, anxiety, depression, and more. If only Jeff Sessions moved forward instead of backward, states could gain even more funding to research the true potential of marijuana.

I remember not long ago hearing the terrible stories of children being taken away from their parents because they tried using medical marijuana instead of harmful prescription drugs. I heard other stories of families picking up and leaving their home state to find a legal medical marijuana state to treat their children or themselves without risk of persecution.

The legalization efforts across the country are creating major waves that are reshaping the modern view on marijuana as it becomes less stigmatized and more accepted for its medical benefits. So why should we go backwards?

Jeff Sessions is attempting to tear down an exploding market that could be worth upward of $50 Billion by 2026. We are at a tipping point in the marijuana industry where it can continue to skyrocket at its current pace, or get knocked down a few pegs by an impeding government. Do I think the industry will fall completely and disappear like Jeff Sessions probably wants? No.

The cannabis industry has too much momentum and growing support to just die because of an overbearing Attorney General, and with most conservatives maintaining their original stance on state rights, there is sure to be some division among the party once the issue hits the senate floor. Despite this, Sessions will surely keep pushing his hard head into the concrete wall that is the cannabis industry.

I think Jeff Sessions knows his time is coming. Trump has spoken out against him numerous times, as well as others in the republican party, and I don’t think I have ever met a person that claimed to like him. The guy sucks, but we shouldn’t worry.

There is so much opposition against Sessions both on the republican and democrat side as well as from the majority of the American public on this issue. It will always blow my mind that the government has yet to learn anything from alcohol prohibition or the war on drugs. When will they just accept their fault and work to make a safer and more accessible market? Colorado and other recreational states have already shown it can be done to great success and effectiveness. Just look at their decreasing opioid use rates and excess taxes going toward schools.

The evidence in favor of legalization and medicinal use of marijuana is growing more and more every day, with new studies revealing effective medical uses, and legal states showing the potential revenue and job creation that can be achieved with a monitored and regulated market. Despite Jeff Session’s best efforts to reverse the progression of the marijuana movement, the train can’t be stopped.