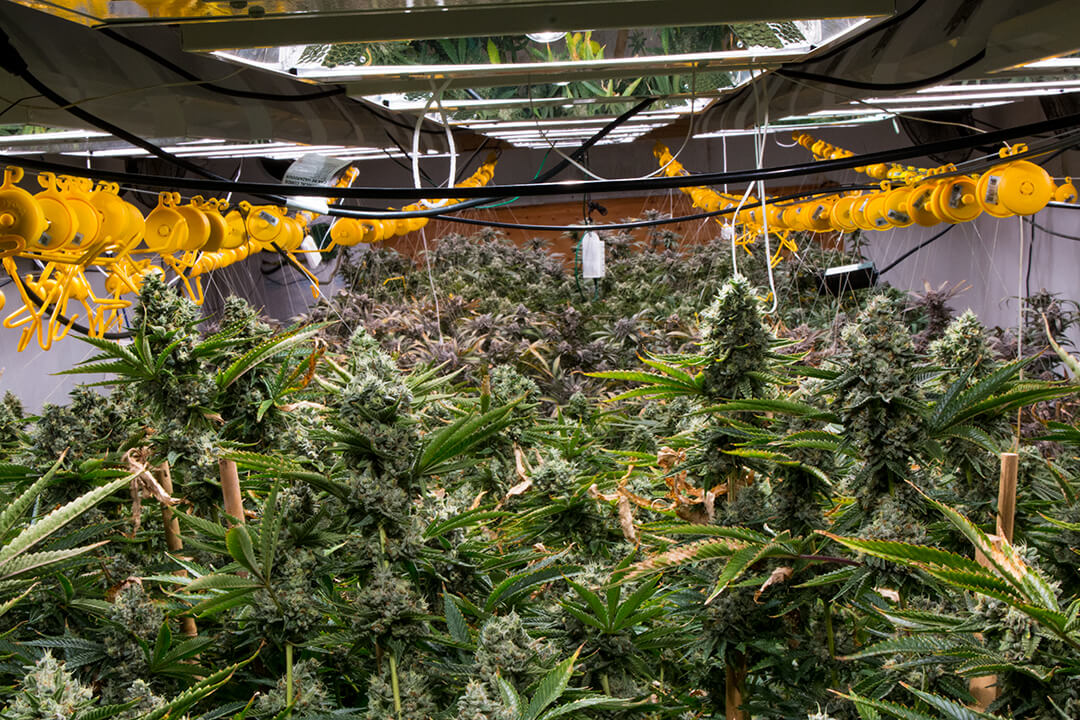 Marijuana is illegal under federal law, but a growing number of states have legalized the drug for medical or recreational purposes in recent years. The changing legal landscape has coincided with a dramatic increase in public support for legalization, which is favored by a majority of Americans.

Here are six facts about Americans and marijuana.

1. Around nine-in-ten Americans favor some form of marijuana legalization 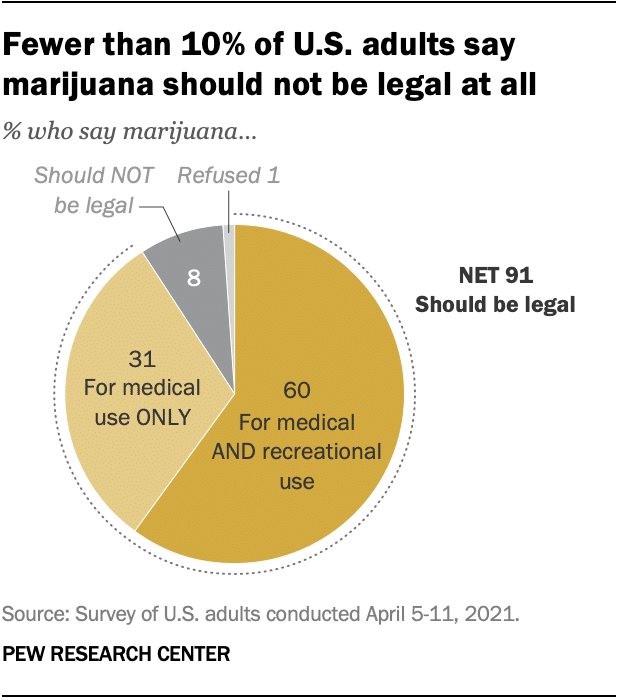 Democrats and Democratic-leaning independents are more likely than Republicans and GOP leaners to support the legalization of marijuana for both purposes (72% vs. 47%).

3. There has been a dramatic increase in public support for marijuana legalization in the last 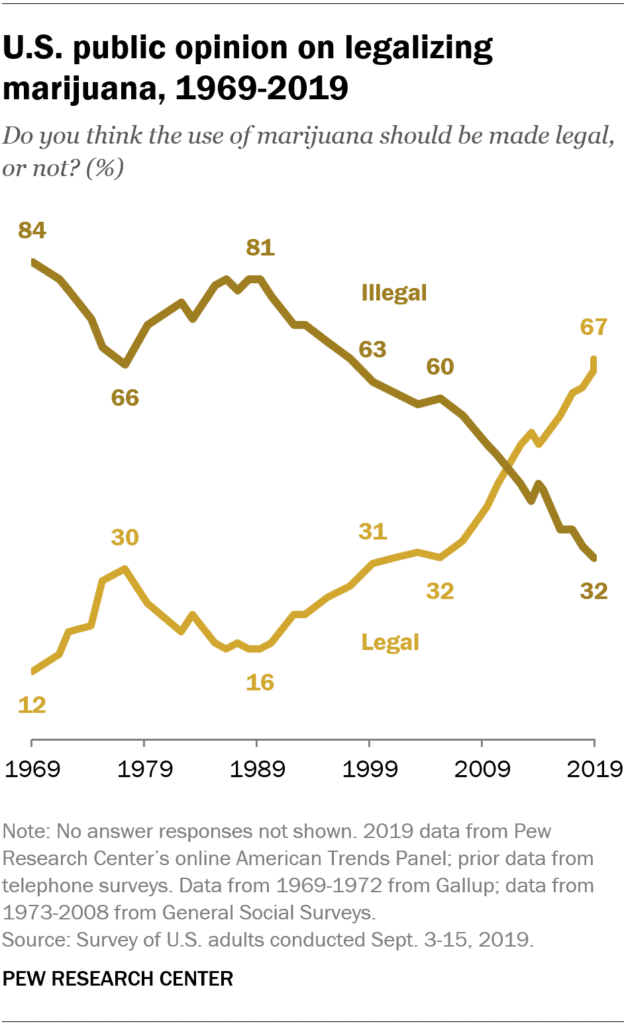 In addition to asking about the medical and recreational use of marijuana, the Center has also asked Americans a more general question about legalizing marijuana. In 2019, the last time the Center asked that question, two-thirds of adults expressed support for marijuana legalization, more than double the share who said so in 2000.

4. Supporters and opponents of marijuana legalization cite different reasons for their views.

Americans who favor legalization are most likely to point to the drug’s perceived medical benefits or to say it would free up law enforcement to focus on other types of crime; 86% and 70%, respectively, say these are very important reasons for their support, according to a Gallup survey conducted in spring 2019.

According to the 2019 National Survey on Drug Use and Health. That is lower than the shares who say they have ever consumed alcohol (80%) or ever used tobacco products (61%).

6. Seventeen states and the District of Columbia have legalized small amounts of marijuana for adult recreational use as of April 2021 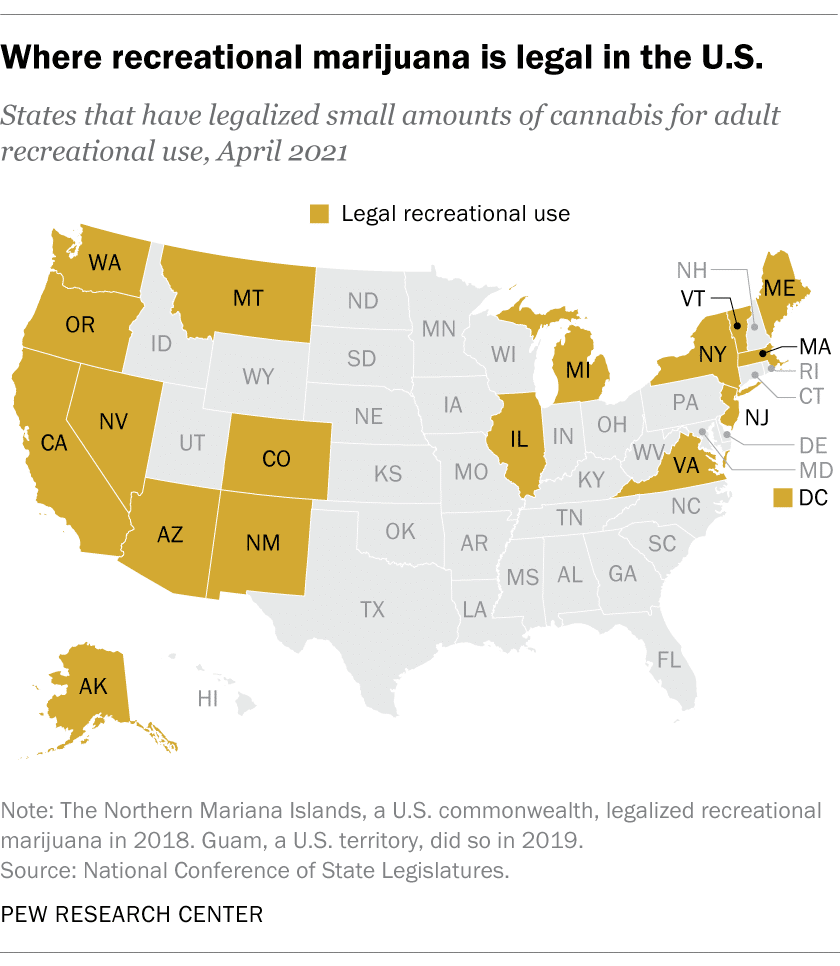 According to the National Conference of State Legislatures. This spring, New Mexico, New York and Virginia became the most recent states to do so. Overall, 43% of U.S. adults now live in a jurisdiction that has legalized the recreational use of marijuana at the local level, according to 2019 population estimates by the U.S. Census Bureau. Guam, a U.S. territory, legalized the recreational use of marijuana in 2019, and the Northern Mariana Islands, a U.S. commonwealth, did so in 2018.

Three dozen states, as well as D.C., Guam, Puerto Rico and the Virgin Islands, have approved some form of a medical marijuana program. Numerous states have also enacted laws reducing criminal penalties for certain marijuana-related convictions or allowing past convictions to be expunged.

Note: This is an update of a post originally published in November 2014.

Research and Article from Pew Research